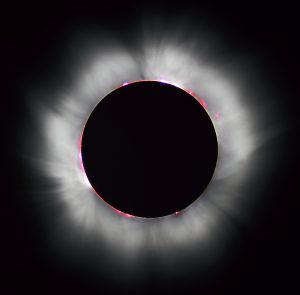 When finding out, I got curious, starting to reflect on the past events of this series, and some astonishing connections were visible, which I would like to share in this article. So this article refers to the history and the underlying energy of this series.

The 1999 solar eclipse was part of a work / book i wrote about Lilith, dedicated to my spiritual journey and then training in Aura-Soma as part of the teacher training, yet not published so far.  Lilith is one name of a goddess energy, long forgotten, and in Astrology it refers to voids, and eclipses. Whenever there are eclipses, not only the nodes, but also the dark moon Lilith is in a certain angle to it. In her goddess energy she refers to an energy that is called “she of many names” – referring to a time almost forgotten – and one of her physical or mythical embodiments can be seen in the Sphinx and in the Queen of Sheeba, the Queen of Samarkand, the queen of the land of the Emerald, so the Emerald Queen. She also refers in a very mythic and mystic way to the Tzolkin, the 260 day round of the Dreamspell – which is more than I can and will describe here.

KEYNOTE: The enduring power of occult knowledge and of its quasi-divine Custodians, „Seed-men“ of a previous cycle of existence.

The belief in an Original Tradition based on the perfect knowledge of the archetypal principles and forms which underlie all manifestations of life on this Earth (and by extension in the cosmos) is deeply rooted in man’s consciousness. The Great Pyramid and the Sphinx are witnesses to such a Tradition, especially for the Western world. The symbol implies that such an archetypal knowledge remains the foundation upon which men’s minds can still build solid and valid formulations, as new evolutionary developments are pending. This fourth stage symbol suggests that this occult knowledge and the traditional process of acquiring it is still available, and that by accepting their principles modern man can best meet the challenge of our present world crisis. The symbol, interpreted from a personal point of view, points to the greatness of a Soul’s past achievements and the value of trying to re-evoke this past. What is revealed is THE POWER OF SPIRITUAL ANCESTRY.

This connection is so remarkable, that I decided to write more than just one article on this connection – here you find in short terms some of the interconnections that will be present in time and space and therefore some historical contexts within the time-space unfoldment and evolution of humanity.

The symbol, the Sphinx and the pyramids, as you can see, refers to achievements that rely on the power of spiritual ancestry, Sokrates through Plato may call this the remembering of the souls journey, remembering what is already there. The great pyramid stands also for technical and historical information that are still to be discovered, as the riddle, how it came to built pyramids (all over the world) is still yet to be solved.

Yet to me it may also be a symbol for mother time and father time. Father time is the clockwork we believe in, the minute by minute scheduling of events, father time are the rising and falling of kings and empires, leaders, political structures. The sphinx as mother time stands for the riddles of connections almost not visible, for rhythms and cycles, for impregnating, pregnancy and giving birth. For seeds, unfoldment, blooming, decaying and rebirth, for the small rhythms of a life, as well as the spiritual rhythm of a soul out of time in incarnation and behind the veils.

So let’s look on the mixture by starting to reflect on father time:

The first eclipse took place in 1639.

In Europe, it was a time in the midst of the 30-year-war, the religious war between Catholics and the people that shaped an other form of religion after Martin Luther, the Protestants. Protestants stood up against the structure of the roman catholic church, and it became a war between brothers, sisters, families, neighbors and friends. A war that shaped Europe, and the loss of people during this time was about 80 % of the population in certain areas of Europe. Yet this fight between Catholics and Protestants was quite quickly taken as a political war. The people in the country belonged to the Kings and Lords of their region, and they had to have the religion their leader agreed to. While the leaders fought their areas in a new way, people had to follow this changing religion, but more and more refused. So as a side effect, slowly it also became a war on freedom of religion, the fight, that people can have an other religion than their leader. But as mentioned, the loss of lives was extraordinary. One example on this: While I searched my ancestry line, I found, that I could trace back one part of my family back to the 1650’s, but then I came to a time where the church book entries stopped – and there was just a historical remark that people lived in the forests for about 20 – 30 years. It turned out, that the area was de-populated of 80 % of their inhabitants.

It can therefore be also seen as a time when the history books stopped and restarted. The Church had been historically the ones registering births and deaths, so a huge rift in “citizen data” took place at this time.

North America was colonized by this time, yet the time of the 30 year wars was also a time of immigration waves to America. America will then play a prominent part in the events of the unfolding cycle, showing with each eclipse how the energy impacts this soil and people.

In the Near East the Ottoman Empire and Shiitic Safavides (Persia / Iran and parts of todays: Iraq, Azerbaijan, Kuwait, Kaukasus, Saudi Arabia, Syria, Bharain, Armenia, Pakistan, Turkey, Afghanistan, Turkmenistan, Usbekistan) sign a contract about the size and frontier lines of their empires that brings peace after a 150 year of war between them. 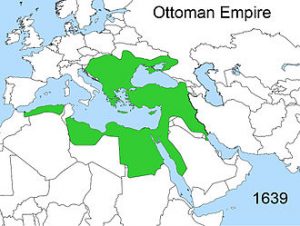 The continent of Africa was colonized. So was South America. Slave trade of Africans existed towards the Islamic nations, the European Empires and to North America.

Russian hunters made their way to the pacific coast in 1639.

Japan expels the remaining Spanish and Portugese merchands from Japan, closing the islands for foreign trading.

Further countries / nations, that show events in the Saros Series are: The Ottoman Empire and its replacements in the same space, Russia, Ukraine (Krim), United Kingdom, Ireland, so more details on this will follow in the next article on the energy of the sequence of events)

A philosophy that life is hard or unforgiving

Facies is the penetrating stare of a lethal weapon. It is one of the most difficult and possibly most violent bodies in the heavens. It gives a penetration of action that has no regard for others and can therefore make a great leader or a dictator. The other side of Facies is the individual who may be the victim of the archer’s stare. Facies can be cruel and ruthless and its darkest shadow is the evil of war. But it can also be very strongly focused and, if balanced, can imply a non-diplomatic but achieving person.

With Facies in your chart then the planet it touches will be very focused and driven and you would need to be aware that the push to achieve goals and aims might well become ruthless. If Facies is the only difficult star in your chart, then it will talk of being focused. However, if other difficult stars are also present, then issues of ruthlessness and even cruelty could be a problem.

To seek inner knowledge; the mystic that can be ruthless

This star seeks the inner eye, the third eye. There is a very strong desire to seek inner knowledge. Alcyone is also linked to the Fates and the judgment of the dead, bringing in ruthlessness when dealing with those who have not fulfilled any necessary requirements. Thus Alcyone is a strong, powerful star indicating visions and mystical abilities. These is also a potential for ruthlessness or judgmental anger. With Alcyone contacts in your natal chart, there will be a sense of vision or insight via the planet with which it is involved but there is also a caution against making rash judgements or being narrow-minded to the point of becoming blind to the obvious. You have the potential for real insight and understanding and so it is important that you do not use this to make harsh judgements.

Texts from Brady, Bernadette. taken from the Software Starlight

As you may see, “ruthless” is a keyword in both energies of the leading fix stars of this Solar Saros Series, so one can just give a quick remark, that the knowledge and wisdom, that lies within this Saros Series, is overshadowed, hidden or faced by ruthlessness. So it Points to a time, where philosophies or concepts hold a grip on people and societies, showing this grip in ruthless actions e.g. wars.

This Saros Cycle also refers to the Transit of Venus.

1639, the year of the start of the Saros Cycle, was also a year of a Venus Transit. Astronomers had calculated that Venus would miss the Sun in her transit, yet one Astronomer Jeremiah Horrocks, had calculated the correct path of Venus, predicting it would be visible – and so it was. In case people are interested in astrological interpretation of the Saros Cycle, I would recommend to research also the dates and impacts of the Venus transits ever since.

As a “mother time” remark, it seems, that during the unfoldment of a solar eclipse, the nations where it is visible get tremendous attention and impact, yet the nations and contintent, where the next eclipse of that series will take place, also starts resonating, showing from then on an increasing amount of events relating to the themes they will emerge through the influence of this Series. The next total solar eclipse path will run across Near East, Russia, Asia, China, Korea, Japan. It might therefore be also a recommendation, to watch, how the unfoldment of energies will take place in the months and years to come…