Tonight 28th June at 4h52 Universal Time (6h52 European summer time) is a very special full moon – and I don’t refer to the name strawberry but to the celestial events accompanying it.

Moon aligns with Saturn in Capricorn, so in Saturns sign of rulership. Saturn happens to be at its brightest phase, which makes the stellium there a rather eyecatching.
Yet Mars, just having turned retrograde, is in the brightest phase since years also, as he is closer to Earth than in the past years, therefore shining brighter in the sky. As Jupiter is also visible, it will be a nice triangular view in the sky of three of the brightest shining planets of our solar system accompanied by the moon. Space weather refers to this night as one of the best to watch Saturns rings – so whoever has a telescope, it may be a very good night to get out with it and watch the sky. I include the star map, speace weather provided for this event. END_OF_DOCUMENT_TOKEN_TO_BE_REPLACED 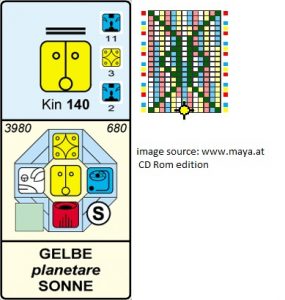 today, 27th of June, is the start of the 13th moon in the haab, the yearly round in Dreamspell.
the Dreamspell as Argüelles adapted it, has 13 months called moons, each 28 days length, and then the day out of time. Each moon starts at the same date (Gregorian time) so – each year on 27th june the last month of the year in Dreamspell starts, ending with the day out of time, then the new start on July 26thth.
Today is kin 140. Planetary sun. The manifestation of the Sun on Earth.
If you look to the glyph of the Tzolkin, where the dot of the current day is seen, you can see that it refers to the lower point of the middle column, which may refer to the base of the spine (if seen from Earth).
Each Sun day is a special day, as we realign our energies with the source of light in our solar system, a second ray love/wisdom energy in this solar system, so the sun on energy level pours love and consciousness to us. the sun may also refer to other suns, other stars in the sky, referring to a sky map creating a celestial being, yet for the human consciousness, the sun is the trafo station for this solar system. Each communication runs along or through the sun, each energy is vibrating through the sun, so whatever energetically happens, the sun is the “google translator” for this energy.
the planetary tone means, we reached a point of manifestation. This is the manifesting energy of the sun on earth. a clear energy channel (as seen in the image as clear channel with no portal days) – so an open energy tube where the energy can easily run from cosmos to earth, from earth to cosmos, via the sun.
the 13th moon is called “cosmic” – as we enter, through the cooperation of the 12th tone, a phase where we can step beyond the currend physicality also energetically into a new realm. In the cosmic energy of the 13th tone it is about to be aware of the celestial

As we reached the base of the spine, so to speak, from tomorrow on we approach the next 10 portal days in a row, On june 30, we reach the cosmic night, the ability to dream cosmic dreams and to weave the dreamtime in the cosmic vision of earth (remember, in love and wisdom throught the sun, not in the energy the cosmic energies may like it, but in the way this solar system is vibrating).
from3rd of July we enter the 10th portal days, ending at july 12th, and from then on the new year is already approaching.
May love, wisdom, consciousness be the vibratory floor of understanding.

One of the most important – if not the most important – book on the Obama era was written and released by Ben Rhodes: The world as it is.
if you want to know, what was it about, why came it into being, what for did they act like this… what is it, to work in the White House – here you find it, honest, deep, with wit and deep insight.
Strongly recommended