Today is the start of the 13th moon in Dreamspell – as each year we are heading towards the Day out of time on July 25th to start a new year on July 26th. This time also is called the starting of the Lion’s gate, as it leads through the time of Leo, which is of greater importance regarding the shift towards the Aquarian age (as opposite in the Zodiak, so when the Sun is in Leo, the moment the sun is setting in the sky and therefore during the night Aquarias can be seen as constellation in the sky). The Lion’s gate therefore is a pathway to the Aquarian age.
As usual, the beginning of a new month as well as each portal day or the day out of time is a day, where visions and dreams can be more vivid. As it is with me. My dream this night showed me some insight in current political issues, and in the times to come this month and to follow.

Dreams are stuff for interpretation, and in this case, it might be a good idea to interpret them with my own storyline. And to this, I have to refer to Atlantis.
My memory of Atlantis is, I stood there, was invited to sing a harmony that would harmonize and balance the dischoard that had built up to a disharmony in all the crystals. While I tried to balance my inner to see both sides, all tones of the story, I realized, that both sides were not so much different, but they had chosen a different approach to it. The misunderstandings had grown too deep. But I tried to concentrate in order to sing that sound, when a flash of light appeared behind me, I turned towards that light when I heard the crystals of the temple break, and the air was filled with the screams and yelling of all beings that went through this experience.
later a friend told me, his memory is, I was in that temple, he and others were outside, trying to hold the space and the frequency, while it cracked and I could not be reached in side. For whatever reason, I was afraid to make sound and noise since I was a child. I loved singing, but withdrew in a closed space.
Later I learned, that a lot of people that went through this Atlantis breaking and the going under of that civilization can not stand noise or strange sounds. Very often, people are afraid to talk. It is their reaction on this moment of cracking, when the yells started to scream and added to the dischoard in the air. A short glimpse of what might have happened is the Movie “2012” from Roland Emmerich, that did not reflect, what we went through in 2012, but it was a close approach to what happened in Atlantis, and how it came, people in the “boats” could reach a new world. It was one of the waves of remembrance that got more vivid the closer we came to 2012.
Whenever people are into the Dreamspell, they may find that gates exist, through which windows emerge. Windows or mirrors, as Aura-Soma would say. Fractals Arguelles would have called them. One is mirrored with the own story and/or can see through time and space into the other dimension that form space and with it in this realm time.
If one uses these windows as gateway, by purpose or by accident, actions have the tendency to be stronger and mirror back to the “actor” – and into realms of dreamtime and manifestation. Something, a large crowd of people know, more than we think.
It so happens, that some of the beings knowing more, are masons. It so happens, that 2012 was a year of election in America. It so happens, that 2016 was also a year of campaigning in America, and the Democratic convention chose to do their “candidate” election on the day out of time / beginning of the new year, so in the beam to the infinite. Whatever I am now saying, may seem as if the democrats did a lot of energy work, but this is not the whole story. Beyond 2012 I saw a lot of Republicans and groups of background stories “seeding” also with technoology , Russia and China added to that, I wrote a lot on it then and there, I can make a long story short, in telling, 5that with the haarp technology (that is spread all over the world, shut down by Obama for military use, but revived by Trump again) and the current Infrared technology used by China and Russia is close to the technology that destroyed Atlantis. Therefore, whenever it is in use, People with Memories of Atlantis tend to have nightmares.

The issue gets a bit more colorful, when we look at it with Aura-Soma eyes. 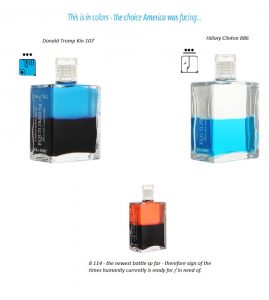 one can see the Colors of Hilary Clinton, and the colors of Donald Trump according to their Birth Kin in dreamspell. You can see, both are turquoise, yet one with clear in fraction, one with deep magenta. Kin 85 is also in connection with Titania, the queen of the fairies, while 107 is Archangel Jeremiel in Aura-Soma.
It took me to this dream this night to understand the connection. Trump and Clinton was 2016 the reflection of the Atlantean fight of both groups, the dissonance they put out got so strong that it crashed – Then and there Atlantis, now most likely America. The political fight going on is therefore not “political” – it is a remembrance of a special way, a fight, that now is turned to the political stage, but it is the same fight. The crash is deep. The glass breaks.

The sound of Atlantis, the attempts of trying to stop that crash, and all that light workers are trying to do, is in the breaking to create harmonies. The broken glass is not edgy, it starts to spin and will show elestial crystals – in a new time. But in fact right now, we may stand on broken red/coral /yellow glass – so the attempt is to break the issues of survival mode.
Obama tried to break the issues of a survival mode in giving people access to health care, the Republicans do the opposite, they try to increase the survival mode in order to stress it, until the glass breaks.
The attempted glass ceiling to break instead of feminism and a woman ruling America turned out to be the broken glass of the crystal temple of Atlantis. With the ability to form new worlds, but an ability that may be beyond the reach of the current generation. My dream tells me, that maybe the new generation can. To us, it may break.

I refer to it in a deeper way, as some visions have to do with it.
According to the dreamspell, the coming year is in Kin 64 – the cosmic seed. The cooperation in the name of the seeds of a new time, seeds of cosmic impact, of cosmic importance. 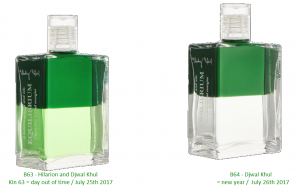 Kin 64 is the bottle “Djwal Khul” in Aura-Soma.
Djwal Khul yet is the name of the Tibetean, that gave Alice Bailey the insights for the books, her work in founding the Lucis Trust.
The day out of time will be in the energy of Kin 63 – spectral night. In Aura-Soma this is reflected by the bottle B63 – Hilarion and Djwal Khul. Another setting of the theme, repeating itself.

During the coming 4 weeks we may experience more and more remembrances towards the Atlantean Crash, the shock of that split. We may encounter a lot of inner yells and dischoards, with some trying to build a new society of equality, where others may want to erase one large portion of the people and the rest shall be the ones in the boat of the new time.
These are the emotions behind the current fight in America, that will expand into the world while the world watches in agony and fascination about the game in America. Then and there both sides they are the rescue of Atlantis, just as well as both sides here thought they do the best for America.

Yet all with Atlantean roots and remembrances to Lemuria and Atlantis may feel an increase pain. If this is the case, I would suggest to turn to calming actions, e.g. the right movements, training, or music / harmonies. I can not say, whether harmony may be suiting, as sometimes an energy is balanced not by a harmony but by a dischoard. Therefore it may vary from time to time, and “heavy metal” may be suiting as well as mantras.
Some people may be through these mentioned issues, already in a state of tranquility serenity, yet if you belong to the other “fraction” that may face the memories and shock of that destruction, just find the waay that suits you.
Know, this time things are different, and memory is mixing with an other future.
Yet it may be a bit of a bumpy ride through the Lion’s gate.
May you find the star that guides you, may the star, that guides you, be your own soul, shining the light on you.
Octavia