If you are playing spider / solitaire you may get aware that s.t an additional layer can help you to solve the current problem

— The founder of Aura-Soma, Vicky Wall, was quoted quite often with a remark, yet i know 2 seemingly same quotes

a) the only freedom i ever had was not saying no

b) the only freedom i ever had was not being negative

The first remark I heard in an Aura-Soma Seminar when i started my training. I struggled with this remark a lot. Why had she no choice but to say yes? why could she not say no? what an impact on her life, what a struggle. Especially women in my understanding had a right in certain situation to say no.

then a few years later, i met someone that told me, her words had been: the only choice i  ever had was not being negative.

if you ever consider to enter a training in Aura-Soma, ponder on this, 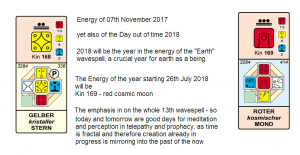 Today on November 7th 2017 is Kin168 – the Crystal Star, also a portal day.
A day for cooperation in the energy of harmony and beauty.
The seal of the star can be seen as symbol for Venus or Sirius – so a star symbolizing an ascension path for Earth, as in the ancient wisdom teachings Earth is to be said an other form of Venus.
The twelth tone and the yellow seal corresponds with this year Crystal seed, so the emphasis on this year in each wavespell is – where is the cooperation of us taking place, in which way, which form. Today, the question is asked – how and where do we cooperate with the intention of harmony and beauty. END_OF_DOCUMENT_TOKEN_TO_BE_REPLACED