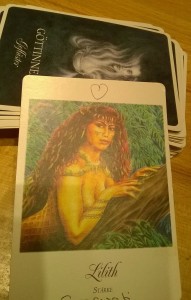 A friend of mine had bought a new set of Cards about the goddesses. I remember how I took them in my hand, it was somewhat in the mid or late 90’s. I had developed an increased sense of energie, not knowing that I did. I disliked the cards as the other side was in blackish, and found that not appropriate in terms of the goddess. On the other hand, I had a bit of a caution for everyone claiming having something to do with the goddess, as their energy was somehow funny to me.
Yet I shuffled the deck to pull one, and held in my hand a card named “Lilith”.
I read the ritual that had to do with Lilith, a ritual to set free of bindings. So one would wear a bondage for a while around wrist or ankle, and then remove it at full moon or new moon in order to set free action and movement.
I did so.
And wow, what a journey started.

About half a decade later I sat in a Seminar having to do with Aura-Soma and the kabbalah. I waited for the part to start, when in the break before we started I found myself menstruating. I did not like the idea getting in contact with the jewish mysticism when menstruating, me, a white catholic woman. I went back inside he seminarroom, telling I was menstruating and not knowing what to do. It turned out, that ALL women were menstruating. Two of us got their mensturation on the same day, one other had it regularly, another one had it out of cycle but on that day also.
I accepted, that this was a higher power at work. And sat there, when the teachers started to talk about the tree of life. They talked about the garden of Eden, Adam, Eve, the casting off… The map given to the Jews in order to find back, the story finished. No word of Lilith.
I could not believe that and insisted. Noone had a remark on her in their textbooks. And I was outraged. I knew Aura-Soma as inclusive, so not excluding something and someone.
I went back home, to write to Mike Booth, the founder of the Aura-Soma teaching lineage, and asked him on Lilith, and got his remark back, that sometimes the question is more important than the answer. But the only remark he could give me, was, that she was taken away from Adam as the gods were jealous about their love.

My real story with Lilith started on that day. Even though I had already heard of her in Astrology, I did not research it.
Yet now i did. For serveral years i studied Jewsh Mysticism that was available in German, astrology texts, apokryphic texts as well as scripture. And I decided to write my Level 4 work in Aura-Soma about her. A journey started, that now, 11 years later, still is not finished, including Aura-Soma reteacher just refusing to read and mark the work as a reseach work.

During that painstaking process and journey, in which I was challenged on all sorts of level including black magic, I travelled to America to do a sound healing seminar. I was on my journey of finding a method of healing for what happenned to me, but also to close that chapter on Lilith, to walk an other path, and maybe to write also an other Level 4 work, that would then be accepted.

At that time, i had a shop in Wiesbaden. When arriving back in my shop after about 2 weeks Absence in America, I opened the door and saw that something had fallen out of the bookshelf. A set of Cards…. All cards were on the floor, but upside down, yet one card was visible.

Lilith looked at me.

It was that set of cards that my friend had bought more than a decade ago, I had ordered it to display and sell it in my shop, and now, with noone entering the shop during my absence, this card looked at me, as the only visible.
I remember how I stood there, looking at that card. And all the intentions fell off…

My journey was not finished.

It is a rough comparison, arising in me while pondering on symbolism, acts, rituals, and politics. During a lecture on the founding fathers of American Revolution, we discussed also Liberalism and Republicanism.

Liberalism reffering roughly as the form of “me first” and if I am happy, all are happy.“ This means, transferred to buddhsim, the own enlightenment (first).

Mahayana in Buddhism is the Boddhisatva vow: to wait with the own enlightenment until all are enlightened. To come back into life (work) until the work is done, and all sentient beings are freed.
This might refer to Republicanism in the way, that community is first, and if the community reaches abundance, wellbeing, then all are rich, well, happy, freed. Until that, work is not finished.

It is said in the Heart Sutra / the Diamond Sutra, that if you reach enlightenment, you recognize illusion, being and non-being, existence and non-existence. And stepping out of the illusion, you recognise the illusion and return to help setting all people free.
So transferred from the Heart Sutra, if someone walks on the path of Hinayana and reaches the enlightenment, he turns towards the suffering, and, as a kind of Boddhisatva, returns until all reached enlightenment.
There are various paths to walk. In the end, they all make that turn towards the other.
The hinayana might only be the longer path.

What makes it so funny to watch in America, is the struggle between this liberalism, republicanism, utilarism. There are two parties called Republican (the Grand old Party GOP) and Democrats. Yet the Name might have Little to do with republicanism or Democratic attiudes. And in these parties, you also find liberal, republic or utilaric streams as well as capitalism etc..

So, my short philosophic remark on Buddhism enlightenment compared to politics in theory might not transferrable to America or Politics as named or in manifestation. Or it might, .. again… as a rough comparison with the current situation:

If all people and all Nation are on the path of „me first“, and each only Think in Terms of ressources, property and Military, earth is devastated.
Reaching their Goals, stepping out of that Illusion, all liberal People might then turn around to help the suffering….
in Terms of politics and earth, it then might be too late. It might then be a matter of existence – or non-existence.

There is an ancient story by the Native Americans. When the old world collapsed, they were shown new land. It was told to the tribes they should inhabit this world, but needed to surround all the landscape in several moves. There is yet the saying, that part of the tribes did not fully complete this walk as promised and settled down in South America, too early, as they needed to walk up to the North at least once more to finally settle there.
The other tribes fulfilled the promis and came to a home in Northern America continent, so the landscape of the today’s nation Canada and USA, yet they remembered the story.
A prophecy was born, when the tribes shall meet again, after hardship due to the broken promise. The time, when the Condor shall meet the Eagle again.

2012 came, the Mayan time. The condor should meet the eagle as prophecies told. The story of this ancient meeting came to me in 2003 along with a movie: the white road. (http://the-white-road.com/) . The white road is a synonym for the path of light, the serpent of light, and the milky way.
The condor should meet the eagle, the eagle referring to a lot of nations here on earth, but also – and mainly – to America.
The movie talks about the Eagle being ready, the transforming of the Eagle in order to meet… Yet it was the Condor, needing to walk up to the North.

In 2012 Mayan priest united with Native American tribes and walked with 13 crystal skulls across the country, blessing sacred sites.

It’s 2014. Immigration reform in America is calling. Mexicans, crossing the border into America. „illegal“.
Yet I have a different view on what is going on. Again and again a voice calls within me, telling me of the promise the south Americas have to keep. They have to fulfill their round. The priests came in 2012. And this is also where the immigration crisis came to a peak.

So what, if… I wonder. What if, the south Americas, starting with the Mexican, get the inner calling now to fulfill the round? By the time, the promise was given, no nation lines were drawn. Now the promise is harder to fulfill. On one hand, no real connection to the nation we call USA or Canada. On the other hand – a lot to do with America. If people change as they have an inner calling, no law can stop them. They get the impulse to move and do the ancient round in exactly the form and shape they were shown in prophecies.
One easy way might be tourism. If the People could come into America more easily, and do their round e.g. by car or train.
Yet this is only one part of the movement, as, when the promise is fulfilled, the Migration will go down South. Not only will the so called Latinos return to their countries, more People will feel the call to move to the south, a land they can live in differently.

So on the outher, there is a crisis in America called Immigration reform.

And
there is an ancient promise.

In the next 30 days – so approximately until Christmas 2014 – the energetics you might experience can be quite challenging with irrational or quantum jump like character. The spin of the Tzolkin reaches again the middle point, we are in direct communication and inflow of cosmic energies.
The communication with cosmos turns from inbreath to outbreath character while the energies are mounting including the challenges since 2012, which can be difficult depending on where you live, and what groups and landscapes you came in touch with went through.

If you like to be prepared I would suggest to harmonize all energies (mental, spiritual, emotional, physical, quantum, virtual, biometric data etc.) no matter whether send out consciously or unconsciously, through time and space. In case you are quite active in virtual networking, this might include all handles, avatars, or anonymous or personal activities, as all actions leave a pattern in our energyfields.

You can do this harmonizing in various ways e.g. through visualizing how strange node-patterns (like boiling water) slow to harmonizing waves like a drop creates waves in water… Or to visualize how a waving lake turns silent and calm.
You can also do healing methods like h’oponopono, huna, applying Pomander, Quintessences and archangelois with the intention of harmonizing all conscious and unconscious energies for your own good and the best for all.
If you like, you might create a prayer or ask your angel guidance.

If you are familiar with quantum, theta or matrix healing you can do this harmonizing applying these methods additionally to the above mentioned.

Find the rhythm that is best e.g several times a day, or morning and evening, until around Christmas time.
Thank you and
Have a great time !