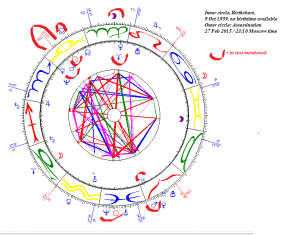 This is the horoscope of the assassined Boris Nemzow.
When looking at the horoscopes, i was completely amazed.

The Problems in Ukraine started during the Olympics in Sotchi. Boris Nemzow was born in Sotchi.

He died, when the Ascendent was EXACTLY on his birth-horoscope-Mars (weapons, war), When the current Neptun (Martyrdom) was in Opposition to his Birth-Venus-Pluto conjunction, while Lilith was conjoing it, when the current nodes touched his BirthSun, when the running Mars was exactly on the southern node (past) of his birthchart,
This is so deeply fate and shows, that his death will cause more disturbance than anyone could ever think of.
Lilith also shows, that his death is significant for Earth herself and the Revolution into Freedom and Truth, in more ways than any of the parties involved might have anticipated.
Lilith / Neptun Shows me, that hidden powers, trying to hide behind a veil,  will be seen, and the process will get uncontrollable (Lilith). I would suggest, one might think also on OIl and Gas (Neptun-mundane).

One could also suggest, there might be a wave of Energy-accidents or warfare occouring, that shall cut Ukraine off from power. I see in Wikipedia, he was kind of an activist for a clean energy, as he expierienced Tshernobyl in a way that lead him to fight for an exit from nuclear power (Pluto), and he also opposed Gazprom, when they „stole / lost“ Money(Venus), that belonged to the Russian people…
Energy issues are deeper involved in this death.

Lilith can not be stopped.
He did something for the soil and for earth, he was benevolent in away i can not find words now, so she will dig or work or fight her way through until truth is reached…

This was my first reaction, when i looked at the Horoscope, so i guess there will be updates on this also in German language in a while.