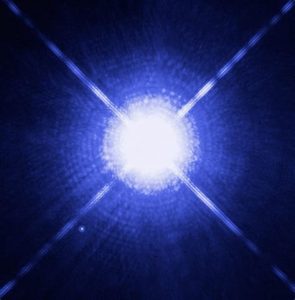 Today, 26th January 2018 in dreamspell is the beginning of the Star Wavespell, which is the last wavespell of each round of the Tzolkin. This means, we have 13 days to complete the current spin of the 260-day cycle of becoming the next better version of the best version one can be. The current spin ends on 7th February, beginning a new one on February 8th

The star is the energy, that communicates between Venus and the Sun. Star is the first kin on the first tone, Sun the last kin on the 13th tone of this wavespell.  It is aligned with the energy of (the struggle for) beauty and harmony. Venus as a star and as a little sister of Sirius was so important that in past times it was placed on the tarot cards, that were meant to pass on knowledge and wisdom of the male initiatory path even during the times of persecution.

Energetically for Earth the coming 13 days may mean something different than in the years before.

In the past years up to 2012 / 2013 there was a tremendous pull at the end of the spin, as the energy culminated on both focus points, towards the more negative emotional and mental states, and towards the more broader awareness, a lighter mental and emotional state, therefore it tended to separate the worlds, accelerating both sides of the story, the energy direction into the darker and “negative” energies, and accelerating also the spiritual path. The great split of the energies, the separation of the timelines, as it was called, happened around 2014 on the higher astral collective and took/takes  a few years to show. The view on what that means, if “negative” emotions and “negative” energies are feeding themselves into a self assuring circle is so vividly seen since a few years, that a lot of people stopped on their everyday way, starting to reflect, how to bridge or change patterns in their lives. A lot of people left stuck patterns, may it be on the downward spiral to the more negative energies or the fixation on some spiritual methods.

One aim of the Dreamspell is the alignment with the energy of Sirius. Sirius is said to be spread and bring spiritual and cosmic awareness, with its aim on freedom.

Due to that, in the here and now the current spin may therefore not increase the tension in additionally giving pressure on decisions, or split the astral in such a degree…. Rather it may enforces and stabilizes each one on the individual path they are on,  creating a lot of smaller timelines and smaller combinations, slowly building a middle class of energies again. The freedom, The energy of Sirius wants to spread into the solar system and on our planetary awakening and consciousness is the one of freedom and choice, higher awareness, and enhancement of life, therefore it may also be essential to build a lot of varieties of expressions how life can unfold here and now in a better way on earth.

Nevertheless, there will be quite some energetic focus days coming, as in the midst of this culminating 13 day period, where one spin ends and an other begins, the full moon eclipse on 31st January is about to happen. The lunar eclipse will be visible in the Pacific Area, so the area where in the past days the earthquakes happen quite frequently. The lunar eclipse is Saros Series 124, that started in 1152.

Shortly after the new spin then begins on February 8th, there will be partial solar elipse, yet only visible in Antarctica and parts of south America. It may first seem not that important, yet due to the Sabian Symbol and my own inner visions this will be the main focus point and culminating point of the year, setting new options. If you study the Dreamspell on the more global term, you may come across the fact that each year’s new year on July 26th in alignment with Sirius and the lion gate has a Seal that is in correspondence with the south pole, therefore Antarctica. This gives each Saros Cycle starting there or visible there the impulse of Sirius directly mingled into it.

One way to see this importance is the round of earthquakes that currently happen quite frequently on the Arctic and Antarctic plate. They show that there is an other way of energy coming into the polar focus on earth. It is quite rare, that Earthquakes are directly on the Arctic / Antarctic or North/Southpole axis, yet in the past months they were showing quite frequently directly on the poles of the Earth. The eclipse on February 15 belongs to the Saros Series 150, that started in 1729.

On each of the coming celestial events I might give out separate articles, in this view here I rather liked to point out that it will not be only the wavespell itself, but it is accompanied on both sides by eclipses this year, that rather build an arc of energy peaks within a certain amount of time. One may see the 31st January as an opening portal, with the end /beginning of the spin on February 7 and 8 in the middle, and then the next portal on 15th of February .  Whatever the energies are, it is a good time to realign with the real goals and issues of the soul and the incarnation, or – on a lesser degree  – to align with projects that may lead to friends and fellows along the way for a certain amount of time in cooperation.
Each of the mentioned days is a good day to align conscioulsy with the energies of Earth and her plane in the communication between Venus – Sun – Sirius.