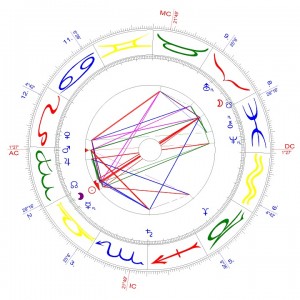 As we measure time in Greenwich mean time (GMT) or Universal Time (UT) I calculated the horoscope for London.

Astrologically one can see Lilith (violet crescent symbol) in conjunction with the Sun–which is the full lunar eclipse. The moon will be fully covered, even though it is a supermoon and therefore said to be larger than normal moons. This is the aspect I was referring to in the section above – if Lilith is at play, the moon is darkened, not the Sun. This speaks of a very ancient relation to the male that we do not have any longer, also a different Female principle, as the Moon tends to have a different relation to the sun today than it was. When Lilith therefore is present, the current female principle is darkened and questioned at the very core of the being. As Lilith and the Sun and the northern node is in Libra, and Libra is a sign for relations and balance, this moon questions current forms of relation at the very core too. Maybe an ancient form of relation Comes to rememberance again, or an ancient form of being, as maybe Plato was referring to.

The Chart also shows Mars at the ascendent, Venus in the 12th house, a Jupiter Neptun Opposition on the ascendant – Descendent in the moment of the eclipse. Jupiter is usually referred to as spirituality combined with Religion,  higher education and the Jurisdiction system. Also with “the wanderer / the traveler” – so with exploring regions far away. Neptun is a symbol for the oceans, for transcendence, but also for crude oil. Mars is quite present as risen above the horizon, so I suggest there will be more news on oil, crude oil, wars, Jurisdiction, Religion, Spirituality and Travel. The Pope in America is one symbol of a huge impact on spirituality and Religion (through travel) – and the recent death toll near Mekka during the Month of the Hajj is also a symbolic Expression of this.
Another impact on „travel“ and „oil“ –  VW / the auto-industry and its measures on emissions are under fire – which could also be seen as a symbolic Expression for it.

With Mars on the acendent, more wars and fights due to religious reasons may rise, as Neptun is opposing it, Oil will be a factor in the months to come. Struggle on oil for various reasons might arise.

The Sun is in the second house, the moon is in the 8th house. 2nd house ruling self worth, the land one is owning (estate) and Venus / Money, while the 8th house rules death, heritages, last wills, and “other people’s money” – so probably also stock markets, the way banks work with the money of people. With the eclipse happening on these axis there might be some difficulties applying on the “money” and “property” business. As Venus is in the 12th house, and as London is home of the “city of London”.  I therefore suggest some newshaving to do with currencies also will Pop up. 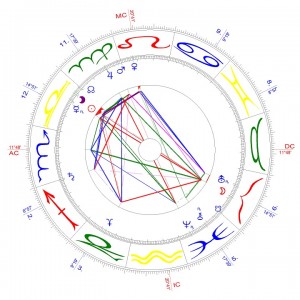 An aspect that is starting to be seen is the square to Pluto – which will be fully active on the 28th by the time the UN starts the 70th General Assembly at 10.00 in New York. I calculated the horoscope in order to Show These energetic, as in the media a Hype was to be seen on this Event.

Ascendent is Scorpio, which is ruled by Mars. So similar issues are active as in the Horoscope of the eclipse according to Greenwich Mean Time / Universal Time.

In Mundane Astrology, Scorpio is ruled by Mars and Pluto, in esoteric Astrology the ruler of Scorpio is Mars, while on hierarchical Astrology Mars is replaced by Mercury. The emphasis of this Energy Symbolic replacement is, that the fights of power and war, represented by mars and Pluto, shall be seen as astral (mars on soul level) and with issues relating to the Solar plexus (Mars as ruler of the solar plexus / Liver area) – but later replaced by Mercury, so by talk, diplomacy, negotiations and contracts. To rise over the issues and the Fog of War towards the real source of the struggle (astral / solar plexus issues ) to finally reach the level of communication necessary.

The eclipse pattern moved into the 11/5th house axis – so is referring to group and group efforts (11th house) – and self expression and creativity (5th house).

With the eclipse happening in these signs I would suggest, that the creativity and self expression should be contained or at least redirected to other areas of life. Squaring the node is Pluto – and this is the aspect I would like to refer to the most. In evolutionary astrology, any planet touching or aspecting the nodes or an eclipse are part of it. Pluto is squaring the eclipse already, yet the aspect gets stronger and more precise by the time of the starting of the General Assembly. The issues to deal with are very deep, it is about the survival of humanity if we do not change our course e.g. environmentally. It is about the survival of a religion (Islam / Jupiter) –if we do not face the refugee crisis. It is about the survival of nations due to the same reason, as Syria in fact does no longer exist. Strangers are flooding into Syria to join ISIL, while the people living there are leaving their home country to go to states that are safer to live in. Whatever will be the talks in Security Council or not, Syria has seized to exist and the Arabian Countries are no longer. This all makes the 70th Assembly one with very heavy toppics.

As the moon is in Aries – in esoteric astrology another shift can be seen similar to the one described with Scorpio. Mars is the ruler of Aries on the mundane level, while in esoteric astrology Mercury replaces Mars (and mars shifts towards Scorpio). One can see, that Mercury replaces Mars each time when it is about a higher level, which symbolises to address aggression and fighting with talks and negotiation, with communication on all sorts of levels. Uranus is nearby, so while the moon is about to activate Pluto during the day, it activates also the connection to Uranus. Uranus in Aries gives a huge energy flow into the headcentres, opening the chakric system. The kundalini energy (Uranus) can reach the headcentres (Aries). Transferred to the body, this can refer to headaches, mundane to Vulcanic eruptions or earth quakes in mountain regions similar to the ones that occurred, when the sun reached Uranus in Aries in Spring this year in the Kathmandu Region.

i would like to adress another challenge hidden in These issues: a Change of perception. As the head centres open, so does the third eye, as the Portals in the universe open, so may the akashic records.
Pluto squaring the nodes opens windows of insight – into death. Pluto relates to the essence, and under this influence karmic patterns may arise and knowledge of other incarnations and especially the way one died in an other incarnation can come up. This might lead to deep emotional feelings of unknown kind and irritation and feelings of threats were others might not see an irritation at all. I would suggest that a lot of people might get visions of deaths and sudden “knowings” of deep psychological issues. People not trained in shadow experiences or in other perceptions might feel under stress – therefore I would suggest that people trained in psychological issues and spiritual / reincarnational matters might mark this time and give further assistance. As in Aura-Soma B113 – Archangel Cassiel was born a few weeks ago, one of the aims might be, to let go of challenging situations that had to do with other incarnations. The doors to dreamtime and the Bardos are open, in the vedic tradition the ghost fortnights were celebrated, in China the harvest moon, which is a family and ancestor feast, is celebrated, and in the west we reach the time of  Michaeli followed by Samhain soon. The portals to the realms of the ancestors are open, and available in a degree seldom reached.

An eclipse shows a kind of transformational – therefore plutonic energy signature. With Pluto squaring the nodes during the eclipse and then the moon activating the square during the day it shows the intensity of transformation that is possible, available, and can be felt – in groups – in relation – and globally/cosmic.

It is a time when a lot of cosmic gates and windows open, into insights and opportunities, past lives and reincarnation, and to urgent calls and chances to change for a better future.

We ARE in the shift.

WE ARE THE SHIFT