The full moon on 24th October takes place in an exact square to the nodes. 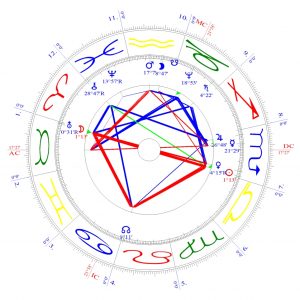 All issues and themes of this year’s eclipses are again activated, karmic, and with effect. The pressure of the insights will mount up to the understanding, that some actions have dire consequences. Yet the good in all of this: if there is so much pressure mounting, then the time for change and correction is here! Why else would the cosmos give so much energy to one place or issue alone, if it was about to be able to change it, now?

Adding to this mounting pressure of karmic insight is Uranus in Taurus at the point of the moon, and Venus in konj. to the Sun in Scorpio. Uranus with moon allows very deep emotional layers to be open and penetrated, releasing the pressure hidden in an explosive momentum, allowing insights into the deepest layers of suppressed issues. This happens  individually as well as collectively, yet it is also possible that Gaia, Earth herself, undergoes this pressure in sudden release of locations that are uncomfortable to her, may it be as sudden volcanic activity, may it be landslides and floods (scorpio) or moving soil  / liquefied Earth (Uranus moving earth /Taurus very fast), or other forms of sudden releases solidified energies e.g. earthquakes (Uranus in Earth sign).
On social or collective layers this energy could also contribute to sudden flash-mob outbreaks of suppressed or very dense / intense emotions, or it may spark very large public movements of revolutionary ideas, reforming stiffened structures in society.

As the nodes are in an exact square on Leo/Aquarius, the mounted frustration may also be in regard to the ideals of the 68‘ movement and the flower power generation. How much do these ideals collide with the mounting of the tightening neo-conservatism or authoritarian energy? The ideals of the age of Aquarius are tested whether they are seen, whether they can still be lived? A lot of the former fighters of the 68’s “make love not war” may be challenged under the current circumstances and may be frustrated in regard to their fight – and love – that seem to disappear from the collective.

Collectively, this is another cosmic alarm situation. It is about to penetrate and access the next layers of change, just the next layer of energy not addressed yet. the new layer shows mixed with a generation used to technology, networking, and so much in an every-day freedom energy that the ideal itself seems not accessible, and the ideal too normal. By the time of the 68’s mass happenings could take place in mostly unpolluted areas, no acid rain fell down from the sky. The real challenge was to crack the structures of war, imperialism and colonialism, dusting off the past, where ideals like some democracies have been installed, yet the way to think was not free, and international cooperation slowly started but also failed in the first attempt of the league of nations. The forests were healthy, the only issue was deforestation, therefore the protests started around the exploitation of natural resources, which lead to the green party movements all over the world. The Nazism energy needed to be cleansed out, that had rooted it poverty, devastation after war, and the imperialistic thoughts of superiority versus minority, which needed regular overturns in order to get the higher position. This stuff needed to be cleansed out, so fresh starts could be done.

Yet now, Nazism is back, on new levels, with seemingly similar arguments and rhetoric, yet with a different ground to sew and root in. Even though some speeches may be – or sound – the same, the people are not. the situation is not. it is not the world after the great depression, it is not the dust bowl famine in America, the stock market crash and inflation time, where money wasn’t worth a thing and nothing to buy was there. It is not the time, where repression had its toll, and structural changes needed to be done in order to get democratic structures also in administration.

the 68’s movement grounded ideals of freedom after colonialism and monarchical imperialism, followed by fascism. Together with workers fights of the 50’s 60’s era, they laid the foundation for the equality amongst people and nations, and they formed the communities where these ideals could be lived in society as a whole. Yet exactly these models are now in threat, therefore the questions of the times are:  what ideas succeeded, what form of communities remain, where does society now show a lack of support, a lack of ideas, where did structure crumble, and where did ideals show erosion? It is a new kind of pressure on the “Aquarian age” vision, a pressure that comes from the need of adaption to an other form of life, estranged of nature and fed by technology.

So for the Pluto in Leo generation it is not time to withdraw, as they are needed again – or – their time is now starting. Being the grandparents of the current generations it is their time to be the wise people of society, teaching the values of what was reached. it is also their time – again – to inspire and explain the values, yet in a different surrounding.

Both Mars and Lilith are in Aquarius, so they also talk about the ideals of the new male within this movement and the emancipatory energy of the new female energies in this form of living. As they are on the southern node, they both remind people about the active fought changes men and women went through to form new communities, and they remind the fighters of that time, too.

As for Europe, by the time of the full moon Pluto is at the MC. Together with Saturn in Capricorn the Lords of time, law, structure show their power. It is a time of “old men”  law and order,  of structural power, of power abuse visible now, of patriarchic structures  where certain kind of order did not ease life but was a form of power. There is a deepening in understanding of time and power, of order and structural density up to immobility. It is about the question, what structure is serving society, earth, people and life? what structure is just  deepening and tightening a grip on something or people.
All of this Is now clearly to be seen. The hidden structures that held power in place will now be revealed to the public eye.
Even though hidden by the light of the day (as the stars can not be seen during the daylight) daylight it is nevertheless the most visible place in the horoscope, and so the theme of visible-invisible – but now to be seen clearly, is playing around in hidden and in open.

it will be about real depth, and to look deep into the shadow, the own one, and the ones of society and the collective. There is no way to look in an other direction, as all forces will mount energy and tension so that the real decision is done. The forces do no longer hide, and therefore there a no longer excuses for non-action.

it will be a time of reflection, inner pressure, and outer outbursts during this full moon. Yet again – the energy and the pressure is there, as we need it in order to do the real changes.  the universe only offers the vast amount of energy as it is necessary to really change.

Additionally to the celestial sky the Dreamspell is about to close the current spin and start a new one, so it is adding and moving the energies in order to make the leap to a higher ground. The energies  around the full moon are exponentially rising in all beings and situations. The own soul is reaching out in a volume that may have shattering qualities, combined with cosmic forces and power, mixed with the vision of Gaia and the threats of a breaking down ecosystem. On the day of the full moon, in Dreamspell it is Kin 259, the blue crystal storm. The storm is about the power of transformation, while the crystal tone speaks about cooperation. So the day of the full moon the cosmos asks the whole of humanity and earth whether they are ready to do the transformational work that needs to be done. As for the 68’ generation, it is about: it was not only then and there, it is also now, why you are here…

If you look at the Sabian Symbols , you will find all the energies mentions also addressed – it is a time of synchronicity, where no one is able to look away, the suppressed will come to the surface, and the time of transformation has arrived.

the time is now!

May the stars shine brightly, and may your soul star guide your path!

The Sabian Symbols for this full moon – completely in alignment with the energies also in symbolism:

KEYNOTE: The cosmic power able to transform all the implications of natural existence.

At this second stage of the five-fold sequence we see a picture which contrasts with the one for the first stage: thus, a celestial display of powe versus a clear, lovely-sounding little stream. Back of every natural self-expression stands the tremendous power of the „Soul-field,“ itself but one of the myriad aspects of the Creative Word that is the origin of this universe. At certain times, this power compels the natural earth-conditioned personality to accept, perhaps in awe, the spiritual potentialities of its „higher“ celestial destiny. This experience of power can both illumine and shatter. The next symbol reveals its positive possibilities.

This is a stage of existence in which „revelation“ is implied, at least as a potentiality. The consciousness may be deeply disturbed by THE VISITATION, but the substance of the individual being can be fecundated by the experience.

KEYNOTE: The accidental nature of opportunities that impel one to break away from a past, the remembrance of which is still poignant and cherished.

A new and greater realization usually demands the sacrifice of something which has brought loveliness and fragrance to a lesser form of living and feeling. Old feelings are poignantly remembered, even as one moves into a new and wider sphere of experience. Old relationships may be left behind, but the memory of their essential moments lingers on, perhaps strong and nostalgic.

This is the second stage of the forty-third sequence. It contrasts with the first in that it reveals the difficulty of dealing with the past as one enters into a new realm of feelings. To the excitement of novelty answers the memory of the graciousness of the past one has SURRENDERED.