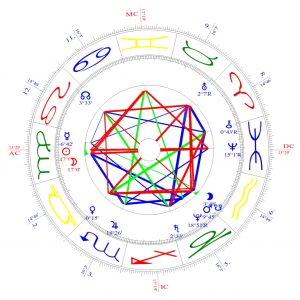 The new moon occurs on 17.00.16 degrees of Virgo, such a tight exactness, that I rather give out two Sabian symbols.
Usually, a Sabian symbol of the  degree that is following is given out. As we do not have a symbol for 0 degree of a sign, and as the planet, when it enters a sign, is in that energy, we always refer to the energy of the degree where the symbol is full.
So with a new moon of 17.00.16 it is the symbol of 18 degrees virgo, but due to the current energy situation, I give out both of the symbols, as the following month may show, what emerges in the collective or the mass or individual conscious

PHASE 167 (VIRGO 17°): A VOLCANIC ERUPTION.
KEYNOTE: The explosive energy of long-repressed contents of the subconscious.
We are dealing here with the dramatic release of energies which have been kept in check by the outer shell of the ego controlled consciousness. It may be a spectacular catharsis, but it often takes paths of destruction. Yet unless some form of purification by fire is experienced, the inner pressure of the karmic past or of more recent frustrations would shake up perhaps even more destructively the very foundations of the personality.
At this second stage, the objective confrontation with an image of the karmic past is replaced by a subjective irruption of repressed memories and primitive cravings. Everything must be released from the psyche seeking to attain the transfigured state. The soul must become empty, the mind translucent. The Keyword is EXPLOSION.

PHASE 168 (VIRGO 18°): A OUIJA BOARD.
KEYNOTE: The ability to contact deeper recesses of the unconscious psyche and sensitiveness to psychic intimations and omens.
The ouija board is to be considered here a modern device similar to many ancient instruments used for divination and prophecy. Certain states of threshold consciousness are stimulated by such a use, and what the experience produces may vary greatly in quality and in origin. The release of unconscious material has lost the explosive force pictorialized in the preceding symbol, yet at this stage there is still no conscious and willful control over what reaches the ego-consciousness.
This is the third stage of the thirty-fourth sequence of symbolic phases in the life process. It is at best a stage of transition which stresses a passive openness to the unknown. The glamour of it may subtly pervert the mind of the aspirant; but in some cases, this can be the first manifestation of INNER GUIDANCE. The difficulty is to correctly evaluate what or who does the guiding.

Both symbols speak of the emergence of something subconscious. In one symbol it is a setting free of suppressed things in an explosive-like eruption, so just the outburst of something,
in the other symbol, inner guidance emerges. The quality of that guidance is up to the person, circumstances, and the clarity of awareness. The inner guidance may emerge through using tools or devices, and one needs discrimination to be aware of quality of message and messenger, yet, it is a slower emerging. in the first symbol, something just breaks loose, in the second (the one we would actually take) something emerges by effort and slowly, as we ask for it to happen, seeking for it.
in one stage therefore the possibility of outbreaks and outbursts of (unwanted) energy, on the other hand the awakening of something, that was trained and asked for.
In the first symbol it represents the setting free of old energy that was blocked, suppressed, not worked with (in a training or forwarding intention) – the other – actual- symbols shows the turning towards the future, the seeking into something.
And, as it was my first thought while reading it, I would like to remind all readers that the “Seth” books by Jane Roberts started through her using a Ouija board. She explored this method as she liked to write a book on psychic abilities, and doing self studies on it. Seth broke through after a few remarks by someone / something else. One can read this story in the (around 2000) published books of the “deleted” materials, and also on her book about ESP power (https://sethcenter.com/products/fells-official-know-it-all-guide-to-esp-power-seth-book-jane-roberts) 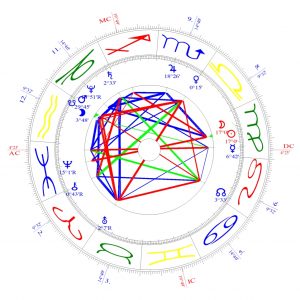 Due to this I show two horoscopes, both calculated on manmade places. the first one shows the energy on the International-Date-Line, the other one for the 0 Longitude of Greenwich, where all time is calculated (Universal time UT as well as GMT start at Greenwich astronomy observatory near London).

Due to the fact that in the past weeks at Fiji extremely large and extremely big earthquakes happened (both time over 8 magnitude and over 600 km deep) – I chose the Fiji islands for the International Day line horoscope.
As you can see, the International Day Line has the New Moon on the ascendant, while the GMT based Horoscope shows the New Moon shortly before sunset. so what for humanity starts as an “I” theme, the theme of defining oneself, for the western world and its clock system it shows as a “you” problem or issue – as the “I” spot of Ascendant turns to the meeting and mating of the Decendent point in the Horoscope. A mirror theme – mirrored deending on  cultures- 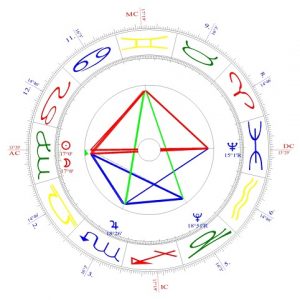 can be seen in it.

Yet adding to this, just as it is with big energies, this horoscope on the 999 energy contains 2 major energy fronts. All planets are either around the midst of a zodiac zign (around 17 degrees – so around the new moon degree) , or at the end/ beginning of a sign, within a range of max 5 degree from each other. So we have two large areas where a “transmission of light” occurs. Therefore I also add the two geometry forms, these aspects are shaping, in two separate horoscopes:
The new moon is directly in aspect with:
Jupiter, Neptun, Pluto,
While the other planets form aspects with the nodes: Mars, Mercury, Venus, Chiron, Uranus, and the void of Lilith.

So within the Energy of this new moon, there are only two sides of the story. Each planet is in either this side or the other part of it involved. there are no other energies or issues at work, but two main stories.
One is a supporting energy of new moon – Neptun, Jupiter with Pluto. A boost in spiritual energy and intension / purpose throught Jupiter and Neptun, but also the danger of too much energy in illusion (Jupiter to boost, Neptun illusion). Pluto in sextile to Jupiter may be seen therefore as a refinement where the longing and the spiritual drive may boost too much into one direction, so he may be a corrector of energies that blow themselves up too much or have expanded too much in the past months.
the other massive energy web is created by mars Lilith at the souther node, Uranus, Chiron, Venus Saturn and Mercury
Mars Lilith shows an extreme meeting between the male energy and the first, archetypical woman, first wife of adam. An intensity of sexual drive in passionate complex relations with carmic ties unfold a deep attraction, almost hypnosis, pouring the carmic pattern into relation or separation.
With Chiron linked to it this may touch the original wound, Uranus may show the real outburst of it, and venus shows in the square aspect that harmony may be lost. Words said may break the karmic relation.
So there is a deep struggle to be seen on issues regarding male (mars) and female (Lilith/Venus) expression, no matter whether the female is the archetypical fierceful goddess in all her allmightyness or whether it is the harmonious esthetic one.
With Uranus also in square, the tensions may show unexpected outburst of vast intensity and electricity. 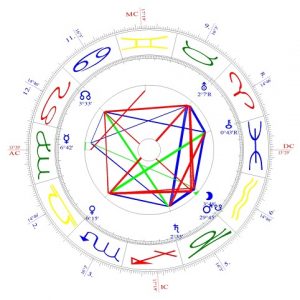 The other planets, Saturn, Chiron, Mercury, are soothing or adding to this. Saturn in Trine with Uranus shows a sudden impuls for the right structure or the right issue, the right ethic, the right wisdom in action, while Chiron in Square with Saturn may show the pain of such a structure, as the wound would rather be healed with the relation, not the structure.
Mercury is in a trine aspect with Uranus, Uranus as the higher octave of mercury, yet mercury has left the trine and is leaving the close aspect. Messenger, as he is, is already on his way to deliver it, ad it is also the message of a healing structure and mental plan, as he is in a great trine.
So Mercury Uranus and Saturn form a helping earth-related trine to manifest and focus words, actions, energies and inspiration with structure.
While at the same time these inspirations may be roughly disruptive to all sorts of relations between the sexes.

on the more global level we may see a stress on financial issues (venus), wargames(Mars) and sudden outbreaks of financial threats or wars. as Lilith belong to the land of “Ur”, there may be a focus on Iran/Irak/Syria /Turkey area, the former paradise region around Euphrat, Tigris and Babylon.
Neptun in opposition with the new moon shows the likelihodd of issues regarding floods, oceans, landslides or crude oil. Yet due to the fact, that a new moon is a sign of new beginnings, this may also mean the new beginning of all issues relating to floods, to the waters of the worlds, and to crude oil.
may the stars shine your path, and may the star you are guide your way.
Octavia