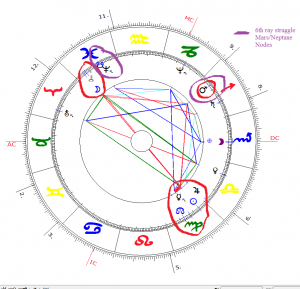 one can see that the Moon is in Konjunction with Chiron during the eclipse. This lunar eclipse challenges the view on medical issues, and on the image of the „invincible“ or the „immortal“ – so the superbeings – or the in mass media pretended giants view of immortality and invinciblity.
Chiron was immortal, so he could not die. One day he went on a hunt, and was hit by a poisoned arrow. As he was immortal, he could not die – but he was not invincible, so he had pain. To cure his pain, to find relief, he (known as healer) applied all his medicine – but could not help himself.
This themeis triggered in the collective, and it is at the southern node (lunar eclipse), so issues from the past – karmic issues – isssues that overshadow the people and the astral – come to the surface. The collective, the people, have to deal with it.
As the sun is also connected with it, on the northern node, the future, it is about the shinign ruler of a country ( in terms of America) – or – the question, whether an inner sun can shine if someone is ill or wounded (chiron) and therefore needs medicine against the struggle on the inner in the immortality / invincible theme.

If you take Hillary Clinton’s birthchart, you see, that her Chiron is right now also activated through Lilith. Chiron is the wounded healer – so an aspect of an inner wound in the own way of invincibility and immortality..
and with the current releases of health records one can see clearly a relation of Chiron with medical issues and problematic themes – or in case of Hillary Clinton and Lilith – the feeling that things (truth) can not be spoken out or one has to leave paradise (Lilith).

to the violet circles are Mars and Neptun. Both are planets of the 6th ray, and even with Mars leaving the square tension, the fact that Neptun is exactly at the Southern node is telling of a karmic battle on the astral with a lot of fogging (e.g. lying, drug issues).
On the outer, mundane,  Neptun rules Oil – so  themes about the war (Mars) on oil (Neptun) may come to the surface, 6th ray of devotion towards anything related to oil, (cars?) – but also it represents the fight for a new understanding of themes that have to do with oil and the way we treat ocean life and water (pisces) – in the picean age – and beyond.
So the fight of the Native Americans in America is very real, karmic, old, and worth contributing to, as people have to deal with an other way of understanding tnature and connection – and differences – between the liquiid of water and the liquid of oil, between baptism and annointment.
In the bodily system one can say Mars is blood – Pisces and Neptun is both water and the canial sacral liquid cycle. With oil as a connection of the Soma in the brain, or the cranial liquid around the brain, that is so essential for a good functioning body.